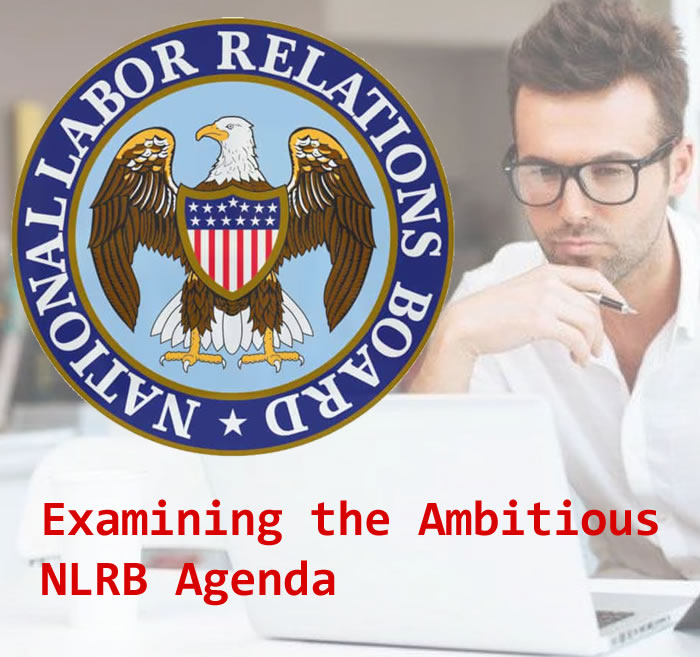 Certainly not to be confused with “Breaking News,” the National Labor Relations Board has followed a significantly more pro-union agenda over the past year, that is part of an apparent effort to increase the reach of organized labor while creating additional challenges for employers in the process.   Some of it is possibly pandemic-driven, but union petitions filed by US workers rose by 58% from October 2021 to June 2022.

For an insightful review of recent NLRB activities, please continue to our blog.

The National Labor Relations Board (NLRB) continues to be the vanguard for the Biden administration’s proworker, pro-union agenda. The Board is also acting on the administration’s goal of creating coordinated, multiagency efforts to support its policy goals and using nontraditional enforcement mechanisms to do so. The most recent examples of this coordination are the two Memoranda of Understanding (MOUs) the NLRB has reached with the Federal Trade Commission (FTC) and the U.S. Department of Justice’s (DOJ) Antitrust Division.

The MOU with the NLRB and the FTC provides the agencies will share information and coordinate investigations in pursuit of anticompetitive conduct that could violate both federal labor and antitrust laws. The ambitious protocols in the MOU include cross-training each other’s agents to help them identify violations of the other agency’s applicable law. The MOU with the NLRB and the DOJ’s Antitrust Division has the same goal and supports information sharing, coordinated investigations, and cross-training of agency staff.

Both MOUs will likely yield more focused investigations, especially for those in the tech and “gig” sectors, where concerns about worker misclassification and monopolistic practices come together. The MOUs are the first tangible sign that the energy of the NLRB is motivating other agencies to act on their progressive pronouncements.

Expanded Monetary Awards Get a Boost

The NLRB has made clear that it intends to impose large civil money penalties for unfair labor practices. Its efforts received a boost when the U.S. 9th Circuit Court of Appeals recently ordered the Santa Barbara News-Press to reimburse a union representing newsroom employees for the legal fees it expended during the collective bargaining process. The court emphasized that unlike litigation costs, the reimbursement of expenses that come from bargaining “falls squarely within the heartland of the NLRB’s delegated powers.”

This ruling will add momentum to the NLRB’s efforts to award new types of damages aimed at addressing the downstream consequences of unfair labor practices. Regional Board offices have already included consequential damages in settlements, including reimbursement for late car and rent fees, interest payments on a loan a worker took out to cover living expenses, and the cost of baby formula because of the loss of a workplace breast pumping station. These often-unprecedented awards seem destined for judicial review, even by the U.S. Supreme Court, where the breadth of the Board’s authority will be tested.

Private litigants are already seeking relief from the courts for aggressive NLRB proposals. A suit has been filed challenging the General Counsel’s authority to limit employers’ use of “captive audience” meetings. Board General Counsel Jennifer Abruzzo had issued a memorandum in April targeting such meetings as potential unfair labor practices. The lawsuit, noting that captive audience meetings have been legal under NLRB precedent since the 1940s, claims the memorandum violates employers’ First Amendment rights to free speech and requests the court deem the memo unconstitutional.

Browning-Ferris: The Case That Won’t Die

Just what the appropriate joint-employer standard is going forward may be determined by a promised regulation from the NLRB or by a possibly final adjudication. Further litigation of the issue by the Board could be an ethical quagmire, as two Board members, when in the private sector, participated in earlier hearings on the matter.

Article by the editors of Federal Employment Law Insider