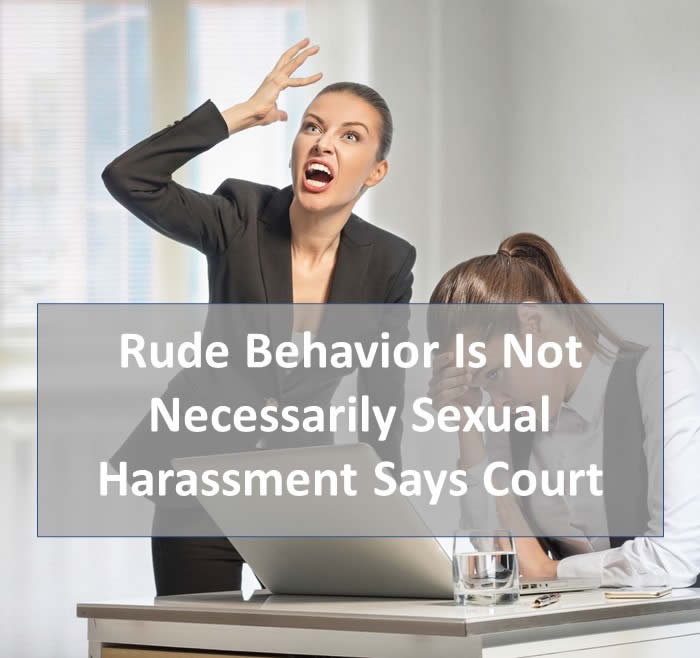 While we may not necessarily want to address this in detail during our harassment prevention training or management skills programs, the U.S. 5th Circuit Court of Appeals recently confirmed again that being a jerk or a lousy manager is not, in and of itself, harassment.  This is true even under the U.S. Supreme Court’s 2020 Bostock decision which extended the protections against discrimination and harassment under Title VII of the Civil Rights Act of 1964 to gay and transgender persons. The legal standard to prove sexual harassment still stands.

For a refresher on the Bostock decision, please revisit our blog post from June:  Bostock Decision and New Resources for Sexual Orientation and Gender Identity Workplace Rights, and for a detailed overview of the nuances of court’s decision in Newbury v. City of Windcrest, TX, please read on.

The U.S. Supreme Court’s Bostock decision extended the protections against discrimination and harassment under Title VII of the Civil Rights Act of 1964 to gay and transgender persons. The landmark 2020 ruling, however, in no way lowered the legal standard required to prove sexual harassment, the U.S. 5th Circuit Court of Appeals (which covers Louisiana, Mississippi, and Texas employers) recently decided. The ruling makes clear that simple rude treatment, without more, isn’t enough to establish a Title VII violation.

Windcrest Police Department hired Brandy Newbury in March 2016. As a new officer, she was in a probationary period during her first year of work. Probationary officers work with and receive training from a field training officer (FTO) for about 14 weeks. In addition to working with her FTO, Newbury worked closely with Officer Blanca Jaime. The two women did not hit it off:

Newbury first complained about Jaime’s treatment of her within a month after starting work. Three months later, she lodged a sexual harassment complaint in writing. The city hired a law firm to investigate the allegations. The investigation concluded Jaime had been rude but that the sex discrimination or harassment allegations were unsubstantiated.

Six months later, Newbury resigned, filed a complaint with the Equal Employment Opportunity Commission (EEOC), and received a right-to-sue letter. She then filed suit in a federal district court in Texas, alleging sexual harassment, constructive discharge, sex discrimination, and retaliation in violation of Title VII and Texas law. She also made claims for violation of her right to privacy and intentional infliction of emotional distress.

The district court granted the city’s request for summary judgment and dismissed all of the claims without a trial. Newbury appealed the dismissal of her Title VII and privacy claims to the 5th Circuit.

The 5th Circuit first reviewed Newbury’s allegations that Jaime sexually harassed her in violation of Title VII, which forbids sexual harassment in the workplace as a form of sex discrimination. Newbury didn’t allege Jaime made unwelcome advances of a sexual nature toward her. Rather, she alleged sexual harassment in the form of a hostile work environment based on her sex, female.

In same-sex sexual harassment cases, courts conduct a two-step inquiry. First, they consider whether the alleged conduct was sex discrimination, i.e., based on sex. Next, they evaluate whether the conduct meets the standard for a hostile work environment claim.

An employee can take three paths to prove the alleged conduct is sex discrimination:

The 5th Circuit agreed with the district court that Newbury couldn’t prove Jaime’s conduct was sex discrimination. She never alleged Jaime was motivated by sexual desire. Nor did she allege explicit sexual animus, i.e., hostility toward women in general.

Instead, Newbury took the third path, arguing Jaime (1) was rude to her because she is a woman and (2) also treated women worse than she treated men. The rookie officer presented only two pieces of evidence in support:

First, Newbury alleged Jaime was rude to both her and another female officer.

Faced with the body of evidence, the 5th Circuit concluded all Newbury could prove was that Jaime was rude to some colleagues and not others. The record didn’t support the allegation that the rudeness was motivated by sex.

Newbury argued that under the recent Bostock opinion (i.e., Title VII protects gay and transgender individuals), sex need not be the sole or even the main reason for the action taken against her. The 5th Circuit disagreed and interpreted the Court’s opinion as prohibiting an employer from taking adverse action against employees because of their sexual orientation or transgender status, which is necessarily tied to sex even if sex wasn’t the sole motivating factor for the action.

According to the 5th Circuit, the Bostock opinion in no way altered the already existing legal standard for establishing sexual harassment. Ultimately, the appeals court determined the district court had properly dismissed Newbury’s sexual harassment claim.

The 5th Circuit also agreed with the district court that Newbury’s resignation didn’t meet the legal standard for a constructive discharge. She claimed Jaime’s alleged harassment was calculated to cause her to resign. The court determined the examples of alleged harassment she provided (namely, two confrontations and general rudeness) fell far short of the required standard of proof.

In addition to sexual harassment, Newbury alleged sex discrimination. To prove the claim, she had to show she was (1) qualified for the job, (2) subjected to an adverse employment action, and (3) replaced by a man or treated less favorably than other similarly situated male police officers.

Again, because Newbury’s resignation didn’t meet the legal test to be considered a constructive discharge, she couldn’t show she suffered an adverse employment action. She also failed to show similarly situated men were treated differently. Rather, the record indicated Jaime was polite to some women and rude to some men. Thus, the 5th Circuit agreed the dismissal of Newbury’s sex discrimination claim was proper.

The 5th Circuit next reviewed the district court’s dismissal of Newbury’s claim she was retaliated against for having filed a written sexual harassment claim against Jaime. The city acknowledged Newbury engaged in protected activity by filing the complaint. Because she resigned and didn’t establish a constructive discharge, however, there was no adverse employment action.

No Violation of Privacy with Alleged Phantom Body Cam Recording

Newbury’s final claim on appeal was that the city violated her privacy by secretly activating her police body camera when she was off-duty and filmed her inside her apartment. An individual may sue a municipality that violates her constitutional rights, including her right to privacy, “under color of any statute, ordinance, regulation, custom, or usage” under 42 U.S.C § 1983.

The city offered testimony from the camera manufacturer explaining remote recording is impossible. Newbury also admitted she has never seen recorded footage from the body camera from inside her home.

Finally, Newbury didn’t provide any evidence the city had a policy or practice of recording employees off-duty, even if she was recorded remotely. Therefore, the 5th Circuit also agreed with the district court’s dismissal of her Section 1983 claim. Newbury v. City of Windcrest, Texas, No. 20-50067 (5th Cir., 03/22/21).

Rude treatment of subordinates or coworkers isn’t ideal workplace behavior and should never be tolerated. Without more, however, it isn’t a Title VII violation. To constitute a violation, the conduct must be tied to an animus against a particular gender, sexual orientation, or transgender status because of the individual’s gender. Crass behavior by someone who is rude to all, or an “equal opportunity harasser,” doesn’t violate the law.

On the other hand, supervisors who treat employees poorly and rack up complaints of rude treatment should be counseled on their behavior and management style. You should strive for an atmosphere of constructive coaching and teaching from supervisors, not belittling or criticism.