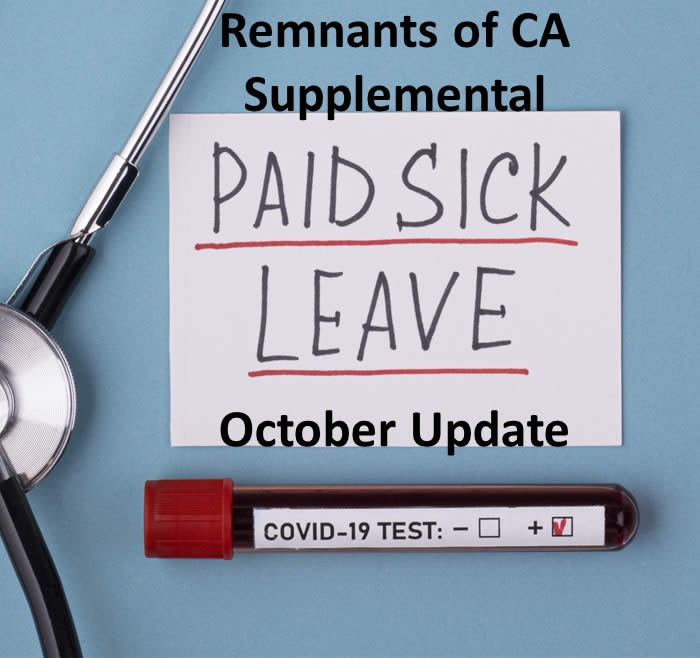 When the sun rises in California on Friday October 1st, it will be shining a light on a work environment almost completely devoid of COVID-inspired supplemental paid sick leave.

As reported in last week’s blog, Supplemental Paid Sick Leave Expires on September 30th, there was no last minute reprieve from the legislature, and the state’s requirement for employers with over 25 employees to provide up to two weeks of paid sick leave in addition to regular, statutory sick leave, will officially sunset at the end of the month.

End of the story, right?  Well, not so fast for employers in LA City, LA County, Long Beach City, Oakland and San Mateo, all of which still have lingering local ordinances that will remain in effect.

Here is a brief run-down of the remaining paid sick leave requirements:

The City of Los Angeles:  The City’s order, which allows for two weeks of paid sick leave for full-time employees and proportional paid sick leave for part-time employees, will remain in effect until two calendar weeks after the COVID-19 local emergency period has expired.  The emergency period has not yet been lifted.  For more information, visit:  LA City SPSL Order.  Also note that the City separately had enacted a measure specifically addressing paid leave for receiving vaccinations; however, that also expires on September 30th.

The County of Los Angeles:  The County has both a supplemental paid sick leave ordinance and a vaccination time off ordinance that will remain in effect until two weeks after the County Board of Supervisors-declared COVID-19 local emergency has expired (which has not happened yet).  The terms are the same as the City’s.  Additionally, the County’s  Paid Leave for Vaccinations Ordinance which entitles employees to paid leave to receive vaccinations, remains in effect.

The City of Long Beach:  The City’s ordinance applies only to private employers with 500 or more employees in the U.S.  Unlike its neighbors to the north, the City Council and the Mayor review the ordinance every 90 days to determine if it is still necessary.

The City of Oakland:  The City continues under an emergency ordinance, which requires employers with  50 or more employees, (as well as franchise businesses and some small businesses) to provide up to 80 hours of supplemental COVID paid sick leave.  This ordinance is tied into the expiration of the city’s March 9, 2020 Declaration of COVID-19 Emergency, which is still in effect.

San Mateo County:  The one ordinance with an actual expiration date – December 31, 2021, employees in San Mateo unable to work or telework due to COVID are eligible for up to 80 hours of supplemental paid sick leave.

Is There a Future For Supplemental Paid Sick Leave?

As of now, the prospects for future statutory requirements for supplemental paid sick leave appear to be bleak.  Efforts failed at the state level and no serious progress has been made on a local level, although San Francisco, San Jose, Sacramento and a few others have been looking into it.  Also, expect increased activity over the next few weeks as the realization that the leave has actually expired begins to set in.