A Primer on Interstate Commerce and FLSA Coverage 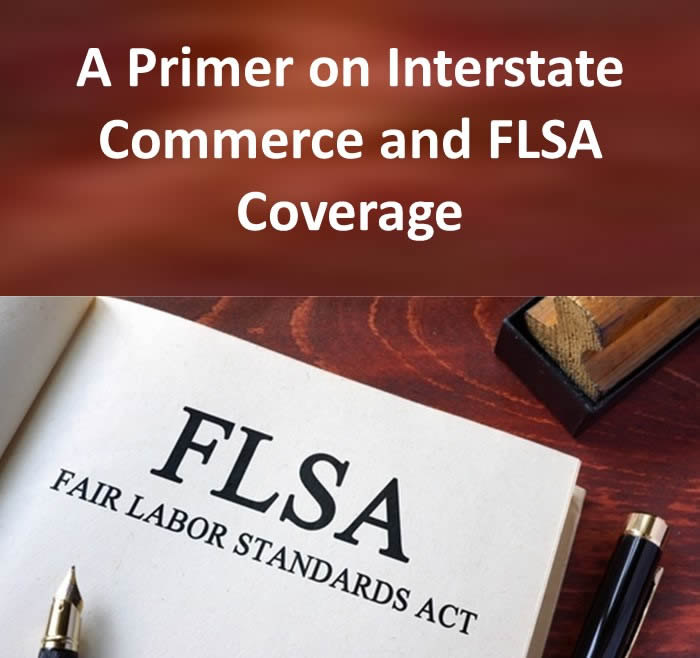 It is not just in CA!  Employers in all states must be fully versed in the nuances of the Fair Labor Standards Act (FLSA) and, as an employer in Florida recently learned, it does not take much to Interstate Commerce to Trigger FLSA coverage.

The US Department of Labor holds that employees are covered by the FLSA on an individual basis when they are engaged in interstate or foreign commerce on the job. Interstate commerce means any work involving or related to the movement of persons or things (including intangibles, such as information) across state lines or from foreign countries.

Examples of covered employees who are engaged in interstate commerce include:

For an overview of a recent 11th Circuit Court of Appeals decision on FLSA coverage, please see the full article below.

The U.S. 11th Circuit Court of Appeals (which has appellate jurisdiction over federal trial courts in Florida, Georgia, and Alabama) recently issued an important decision about when an employee is covered by the Fair Labor Standards Act (FLSA). Specifically, the court looked at whether the Act protects an employee who makes three to five phone calls per week to out-of-state customers and vendors.

The FLSA is a federal wage and hour statute that sets various requirements for how employers must pay employees. Most notably, the law requires you to pay employees at least the minimum wage for each hour worked and overtime pay of 1.5 times their normal hourly rate for any hours worked over 40 in a workweek.

All County Environmental Services, Inc., a pest control business, had only one location in south Florida, where Wendy St. Elien worked as an administrative assistant. She filed suit alleging the company failed to pay her overtime. To prove she was covered under the FLSA’s “individual coverage” standard, she had to show she engaged in interstate commerce in her employment.

The 11th Circuit examined the FLSA’s text and found the term “commerce” does indeed include out-of-state communication. Therefore, St. Elien was engaged in commerce as the term is used in the law, and her employment was covered by the Act. Wendy St. Elien v. All County Environmental Services, Inc., et al. (Case No. 20-11619, March 18, 2021).

The 11th Circuit’s ruling shows the FLSA can be read broadly to cover different types of employees. You should be extremely cautious in determining employee coverage under the Act. Consider consulting with legal counsel before deciding whether an employee is covered and thus entitled to its protections including overtime pay.

Article courtesy of content partner BLR. Author Jeff Slanker is a shareholder at Sniffen and Spellman, PA, a law firm with offices in Tallahassee, West Palm Beach, and Pensacola, Florida.