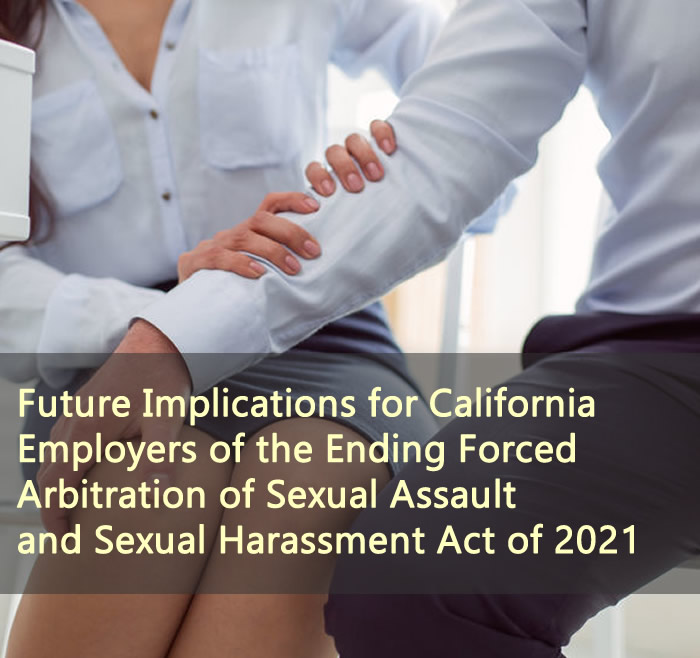 Employers have had a few months now to digest the impact of the “Ending Forced Arbitration of Sexual Assault and Sexual Harassment Act of 2021,” which was signed into law by President Biden on March 3rd.  By now, those with employment arbitration provisions that include a requirement to arbitrate sexual harassment and/or sexual assault claims should have begun the process of reviewing and probably revising the agreements to comply with the Act.

While this impacts employers in all states, California employers should be extra attentive to possible adjustments to the state’s laws that will usually afford more protections than the federal laws.

The full text of the legislation can be found here H.R.4445 – Ending Forced Arbitration of Sexual Assault and Sexual Harassment Act of 2021 and, for an insightful look at possible future implications for California employers, please continue to our blog.

FAA Amendments Will Have Effect on California Law on Arbitration of Sexual Assault, Harassment Claims

At least three times this decade, the California Legislature attempted to put limits on predispute agreements to arbitrate sexual harassment, discrimination, or other types of employment disputes. Every time bills were sent to him, then Governor Jerry Brown vetoed them, calling the provisions illegal under the Federal Arbitration Act (FAA). The FAA preempts and nullifies any state law contrary to its broad pro-arbitration policies.

No more. The U.S. Senate and House of Representatives recently passed, and President Joe Biden signed, a bipartisan amendment to the FAA, coauthored by the strangest of bedfellows: Senators Kristen Gillibrand (D-New York) and Lindsay Graham (R-South Carolina). For claims that arise or accrue on or after March 3, 2020, the law prohibits enforcement of mandatory arbitration agreements or class action waivers in cases alleging sexual assault or sexual harassment.

The law makes unenforceable all predispute arbitration and class action waivers in cases alleging sexual harassment or sexual assault. Any disagreement regarding the dispute’s enforceability under the FAA is decided by a court applying Federal law, not by the arbitrator.

Beyond what it does to the federal law, this amendment presages significant change to California law as well. First, anticipate an amendment to California’s Arbitration Act to similarly limit predispute mandatory arbitration or the ability to bring a class action whenever sexual assault or harassment are alleged.

Third, while the statute carves only sexual assault or harassment claims out of the FAA, the same rationale will soon apply to claims of discrimination or other public policy wrongful discharge. Almost everything one can say in support of a sexual assault or harassment victim’s right to a public trial can also be said for many victims of other categorical harassment, assault, or discrimination.

Moreover, many cases allege both sexually motivated misconduct and other forms of unlawful discrimination. Will the alleged sexual misconduct require trial while the rest of the case is sent to arbitration? The amendment invalidates any predispute arbitration agreement or class action waiver regarding a case that “relates to the sexual assault or the sexual harassment dispute”—perhaps suggesting that if the dispute relates in any part to sexual assault or harassment, it all goes to trial. Likely, a rule and practice will develop wherein all claims are decided in one forum, probably in court; few employers will push for simultaneous trial and an arbitration proceeding on two separate theories of liability.

In the biggest picture, these are all steps toward invalidating predispute arbitration of all employment-related disputes, a long held legislative priority of plaintiffs’ lawyer groups. Adding weight to that trend, even before the pandemic, big-name companies such as Google and Amazon jettisoned mandatory prehire employment agreements, largely to recruit the best employment candidates; the current employee-strong hiring and recruitment environment adds to that trend.

Arbitration is designed to be a win/win for people who agree to it. Most often, it gives the same quality and results as a court. It is quicker, more efficient, less expensive, and friendlier to and more respectful of the parties. It provides a less public fight, which often benefits both parties. There is a lot going for it. On the downside, it is almost impossible to appeal an arbitrator’s decision even if it is wrong. And if you want a jury to decide liability and the amount of damages, arbitration doesn’t provide that.

Most prehire form arbitration agreements aren’t creatures of mutual agreement, hence the underlying hostility to them. Add public outrage over alleged presumed sexual abusers judged privately behind closed doors in arbitration, and limitations like these are the result.

Article courtesy of content partner BLR.  Author Mark I. Schickman is Editor of the California Employment Law Letter and the founder of Schickman Law in Berkeley, California.