Federal Agencies Continue to Step Up Efforts to Combat Retaliation 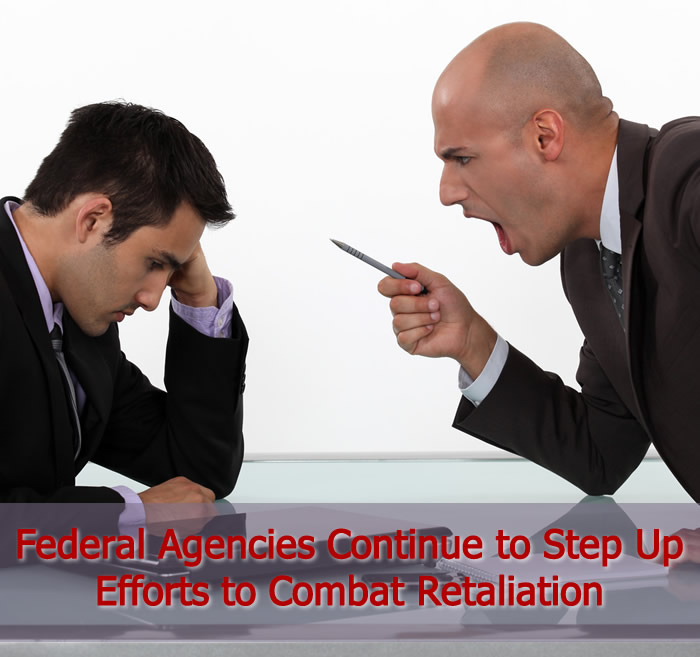 Not that it has ever been doubted; but recently heightened activity by federal agencies led by the DOL in partnership with the EEOC and the NLRB, should be sending a crystal clear message to employers that, more than ever, there will be zero tolerance for anything hinting at retaliation.  The DOL has pledged to “use every tool available” to “uphold the rights of workers to identify violations of the law without fear of termination or other threats to their reputation, safety or livelihood.”

Building from the March issuance of the field assistance Bulleting Protecting Workers from Retaliation, on April 21st, DOL’s Wage and Hour Division released another press release, this time announcing that it had successfully obtained a temporary restraining order against a New Jersey employer for alleged retaliation.  The order reiterated that “threatening or firing employees who ask for proper pay is egregious and illegal retaliation.”

For a useful summary of the DOL’s current positioning as detailed in the March order, please continue to our blog.

Retaliation continues to be at the top of the federal government’s priority list. In March 2022, the U.S. Department of Labor (DOL) issued a new field assistance bulletin titled Protecting Workers from Retaliation, which addresses worker protections from retaliation under laws enforced by the agency’s Wage and Hour Division (WHD). The DOL pledged to “use every tool available” to “uphold the rights of workers to identify violations of the law without fear of termination or other threats to their reputation, safety or livelihood.” The DOL, the Equal Employment Opportunity Commission (EEOC), and the National Labor Relations Board (NLRB) recently announced a joint initiative to combat retaliation.

According to the DOL, retaliation occurs when an employer, including through a manager, supervisor, administrator, or other agent, takes “adverse action” against an employee for engaging in “protected activity.” The agency defines an adverse action as “any action that could discourage an employee from making a complaint or expressing concern about a possible violation or engaging in protected activity, such as filing a complaint or cooperating in an investigation.”

A retaliation finding also requires a causal connection between the protected activity and the adverse action. It’s important to note more than half of all EEOC charges filed by current or former employees in recent years contained retaliation allegations.

The WHD investigates employers to determine compliance with antiretaliation provisions under several laws, including the Fair Labor Standards Act (FLSA), the Family and Medical Leave Act (FMLA), and other federal equal employment opportunity (EEO) laws. The Biden administration, through the DOL, has ramped up its enforcement efforts against employers and “will consider all remedies and sanctions available to protect workers and change behavior,” including injunctive relief and lost wages caused by the retaliation.

First, make sure your organization’s employment antiretaliation policies are current and regularly reviewed by experienced employment counsel, clearly and frequently communicated, easy to understand, consistently enforced, and, most important, include a clear complaint process for anyone to use.

Second, give regular training to supervisors, managers, and employees on their commitment to EEO and a workplace free from all forms of harassment, discrimination, retaliation, or other unlawful conduct. Notably, leaders must understand the importance of following your organization’s complaint process and reporting any complaint or concern raised by an employee, customer, independent contractor, vendor, supplier, or other nonemployee work contact.

Finally, leaders must understand the importance of not taking adverse action against any employee who, in good faith, makes a complaint, raises a concern, or opposes an illegal or unethical practice of any type.